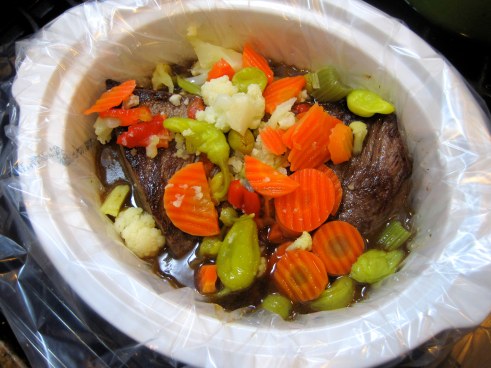 This might be the best thing I’ve tried in the slow-cooker to date. It’s no secret that I’m not a huge fan of the slow-cooker (it’s a mushy texture thing), but I have found that if you take the time to sear meat before you braise it (i.e. toss it in the crockpot with some liquid), it does a lot for the final product.

This meal was a bit serendipitous as it served a few purposes. I’ve been pinning a ton of slow-cooker recipes lately as we are moving AGAIN  and I will be staring down the barrel of a 2-hour round-trip commute starting in a couple of weeks. I have a feeling my slow-cooker is about to get real popular ’round here.  Also, because of the impending move, I am REALLY trying to use up some of my pantry items that I a) haven’t used since the last time I moved or b) have hoarded since the last move a year ago and don’t want to move now. I found a dusty jar of giardiniera (italian pickled vegetables) that I needed to just finally use or lose. I’m so glad I did. This recipe was the bomb, and I am more than pissed that I didn’t get a pic of the resulting tender roast that we served atop fluffy mashed potatoes and smothered in a homemade beef gravy. YUM. Make this.