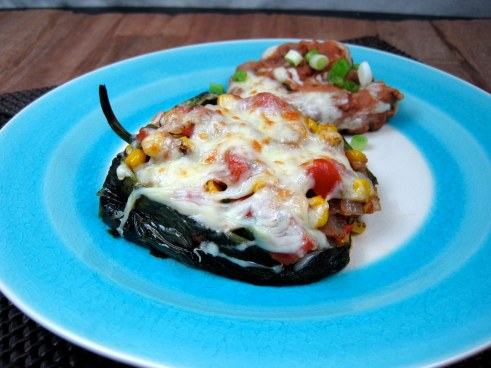 So you’re probably thinking, “this thing is covered in cheese, how is it ‘lighter’?” Well, friends, this thing is usually sans veggies, deep-fried AND covered in cheese. This is actually a vegetarian meal you can feel pretty good about. Yes, there’s cheese. But cheese makes the world go ’round. And it’s covering loads of corn and veg. Now, I will warn you, poblano peppers can be a little inconsistent in their heat levels. I’ve had them when they’re very spicy or very mild – tonight we sure got some spicy ones! But just dollop some greek yogurt or sour cream on top and all is mellowed out.

One thought on “Lighter Chili Rellenos”